Polish-American Heritage
in
and 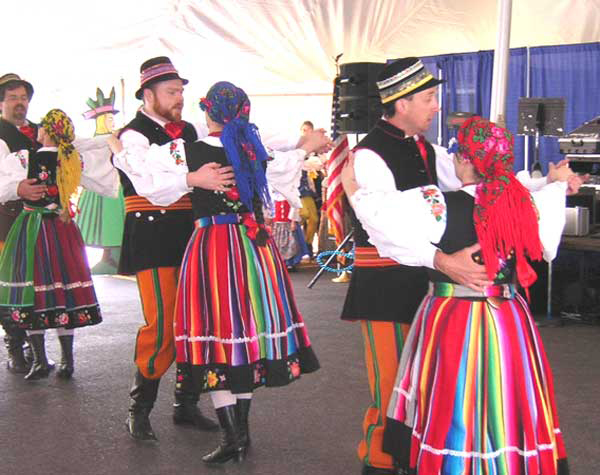 The Polish influence in can be traced back to Pieter Stadnitski, one of the partners of the Holland Land Office Company; the Dutch company which purchased and brought settlers to the area in the early 19th century. More specifically, Polish settlers of Jewish heritage began arriving in the area before 1860, while Catholic Poles began arriving in large numbers soon after. Between 1873 and 1922, Polish Americans established 34 church parishes in Greater Buffalo and .

By 1940, there were 76,465 Western New Yorkers of Polish stock, and in the 1990s a great number of people from this area claim to be of some Polish descent. Many of them still live in the areas of the city that their grandparents and parents first settled: Broadway-Filmore, Clinton-Bailey, Black Rock, and as well as , , and .

The Polish Community Center, 1081 Broadway, Buffalo, NY 14214 [ ] is housed in "Dom Polski," or the Polish Home.  The Home was organized in 1905 to assist Polish immigrants in adapting to their new country.  The currently houses the J.C. Mazur Gallery and offers occasional film series and literary readings, all open to the public.  The functions as a community-based human services center in a neighborhood that was once predominantly Polish.

and Naval and Serviceman's Park, 1 Naval Park Cove, .  There is a "Polish Room" located on board the Cruiser Little Rock.  The exhibit was created by and features the story of Polish-American veterans in WWII.  It also includes displays depicting the Polish Home Army.

, South Division and Main streets (adjacent to the ).  This statue of General Kazimierz Pulaski was presented to the city by the people of in 1976 as a gift during the bicentennial of the .

The , and Porter, .  This monument was created by artist Jozef Mazur in the 1920s.  It was originally located in front of the Buffalo Museum of Science but now stands before Kleinhan's Music Hall.

Holy Mother of the Rosary Polish National Cathedral, 6298 Broadway, [(716-683-7527 and (716) 685-5767].  This church replaces the original Cathedral located at Sobieski and Sycamore streets, where it served the people for 99 years.  It is a contemporary structure that evokes the wooden churches of the Goral region.  It has incorporated many of the original windows, statues, and other furnishings, blended with new carvings and images.

Stanislaus Roman Catholic Church, [ ounded in 1873 by Father John Pitass.  Oldest Polish-American Catholic Church in .  As the mother church, this is where historical events are commemorated and where ecclesiastical and secular dignitaries meet.  Church was decorated by Jozef Mazur.  Sunday Masses are in Polish at and (radio Mass).  The "Polska Czytelnia," the oldest Polish library in the , established in 1889, which has a collection of over 8,000 Polish books and journals, is located in the .

St. Adalbert's Basilica, [ ].  Founded in 1886, it was designated a basilica in 1907.  It is the home parish of artist Jozef Mazur. Polish Language Mass on Sunday at .

St. Casimir Roman Catholic Church, & Casimir, in 1890, it is an excellent example of Byzantine architecture.

Corpus Christi Roman Catholic Church, Founded in 1899, it was the first home of the Polish Franciscan Fathers (O.F.M. Conventuals) established by Rev. Jacek Fudzinski.  The parish holds a Dozynki (Harvest Festival) in August.  Polish language Masses on Sunday at and .

Assumption Roman Catholic Church, [  Founded in 1888, the Romanesque style church seats 1,600 people and offers a Polish-language Mass on Sundays at .  The Church hosts an annual Polish Carnival in the spring, which includes films, concerts, a gourmet dinner, and a carnival dance. The sanctuary is decorated with scrafitto images from the life of the Virgin Mary done by artist Joseph Slawinski.

St. Francis Conventual Friary, ouses two chapels decorated with scraffito murals of Polish and Polish-American history by Slawinski and De Rosen, who also did a giant mosaic at the National Shrine of the Immaculate Conception, .  The Father Justin Rosary Hour, heard across the and is produced here.

Bridge at Black Rock (over the ).  Sir Casimir Gzowski built the first international suspension bridge over the .

Polish specialty shops at the Market include:

Adam Mickiewicz Library & Dramatic Circle, [
The Dramatic Circle was organized and began producing amateur theatricals in 1895. The library contains over 4,000 volumes and over 400 hand-written scripts for Polish plays. The building serves as a social center as well.

The Polish Room, Lockwood Library, SUNY , North Campus, [(716) 636-2815]. (http://ublib.buffalo.edu/libraries/units/lml/polish-room/index.html) The Polish Collection was begun in 1955. Current holdings include books, periodicals, newspapers, films and artifacts covering the numerous contributions of the Poles in the humanities, science and history. Over 9,000 volumes, over 30 video recordings and a small collection of rare books and documents.

, SUNY Buffalo, North Campus, opened in April 1997. Developed by Piotr Pienkowski, a professor at the in , it is a unique inter-university agency of the and SUNY Buffalo.  It will serve as an information clearing house for those interested in pursuing studies related to , its culture and language. More information can be gotten from its web site at http://wings.buffalo.edu /info-poland.

The Fronczak Room, Library, , [ .
The collection was donated to Buffalo State College by the Fronczak Family. The bulk of materials documents Francis Fronczak whose extensive career included national work with the Polish relief efforts in WWI & II, and his 35-year tenure as Commissioner of Health in .

, . A special collection in the college library contains 3,000 volumes in the Polish language, with a focus on literary and historical subjects relating to .

Franciscan Sisters of , [ .
The Sisters maintain a , which houses books, journals, records, audio cassettes, play books, and memorabilia relating to Polish heritage. Most of these are in the Polish language. The focus is on religion, history, literature, theology and philosophy.

Felician Sisters Archives, Immaculate Heart of , . Collection based on the Felician community and its ministries (schools, parishes) in , , and the . Four Sisters were editors of the Polish language magazine, Ave Maria. (1924-1984). A Heritage Room of artifacts and documents related to the religious order is open to the public is located in the Provincial Convent Buildig.

The Festival serves as a family-oriented gathering place that both Poles and non-Poles can enjoy.  It offers an excellent opportunity for Polish entertainers, artists, and crafters to perform in front of a large audience.  It also gives Polish-American organizations and vendors an opportunity to showcase their talents and services.

The Festival takes place the third weekend in August with food, traditional crafts, workshops, and entertainment.  For more information, call the .

++ Some of the local polka shows are:

++ The Father Justin Rosary Hour is the oldest Polish language radio program of a religious nature in the .  Founded at Corpus Christi Parish by Father Justin Figas in 1931, it is still broadcast across the and on WXRL (1300 AM) and WHLD (1270 AM).

Polish American Journal, [ .  Editor: Mark Kohan. Founded in in 1911 the focus is on national and international news.

Kronika, .  Founded in 1995. Quarterly focusing on news for Poles on the Niagara Frontier.

Chopin Singing Society [ .  Organized in 1899, the Chopin Singers have been featured on radio and television and appear regularly with local orchestras.  They have won international recognition as a premier mixed-voice chorus.

I. J. Paderewski Singing Society, Organized in 1939.  The Society has placed in several international competitions and has been heard on radio and television.  In addition to an annual concert, the Society frequently appears at local religious, patriotic, and anniversary celebrations.

St. Hyacinth's Men's Choir was founded in 1946 at a parish of the same name.  The Choir averages about 50 performances annually at various church and social events and has also produced an album.

Polish Genealogical Society of New York State, Founded in 1988 to promote the study of Polish family history.  Monthly meetings held at the 2nd Thursday of each month at .  For more information, see the web site at http://www.pgsnys.org/.

Kalina Singing Society, Organized in 1901 under the auspices of the , it is a female chorus that has won many competitions and participates in many festivals and benefits in and outside the region.

Jozef Mazur (1897-1970) was born in a Galician family in 1897. He studied at the in and at the New York Art Institute. Mazur worked in a variety of media. His stained glass works can be found in churches in City and . Before he became 30, Mazur distinguished himself as an ecclesiastical painter in this area. His first commission was the complete decoration of St. Stanislaus Church in . His works can also be found in St. Adalbert's, Blessed Trinity, the Polish National Cathedral, St. John Gualbert's, and , Holy Trinity in , and St. Aloysius in Springville. Mazur also painted churches in , , , , , and and in . Mazur's secular works include the sculpted bust of Chopin (see Places to Visit), a life-size portrait of Kazimierz Pulaski in , and interior decoration at the UB Main Street Campus.

1. was the founding city of the Polish American Congress in 1944.

2. is the home of the Polish Union of America, which was founded in 1890 and is the largest Polish fraternal headquartered in New York State.

3. Seat of the Buffalo-Pittsburgh diocese of the Polish National Catholic Church is Holy Mother of the Rosary Cathedral in (see Places to Visit).

5. The Catholic League for Religious Assistance to was founded in in 1943.

6. The Polish Baptist Church movement originated in with the founding of the in 1894.

8. has the oldest and largest religious radio network in the Polish language.

9. The Roman Catholic Diocese of Buffalo observed 's Millennium of Christianity in 1966.

This HERITAGE SHEET is one of a series originally prepared by the Western New York DOCUMENTARY HERITAGE PROGRAM (DHP).  The DHP was established by law in 1988.  It is a statewide program designed to locate, organize, and make available the state's historical records that are critical to ensuring the survival of 's heritage.  The DHP is administered by the New York State Archives and Records Administration, State Education Department.  It consists of regional services provided throughout the nine Reference and Research Library Resource Systems and a statewide competitive grant.  The Regional Archivist for this area serves Cattaraugus, Chautauqua, , , , and counties.  The Documentary Heritage Program is administered in by the WNY Library Resources Council.

Other "Heritage Sheets" available from the DHP:  African-American; Hispanic/Latino-American; Irish-American; and Italian-American (available in the future).

If you have corrections for or suggestions regarding this Polish-American heritage sheet, please contact:

Photographs courtesy of the

Back to Polish Union of America